Birds might seem harmful and peaceful creatures of nature but they can be a pain if they are too large in number. In Geelong alone, there are around 300-400 species of birds out of which many are found in big flocks. Birds generally reside in trees and bushes and barely come in contact with humankind but due to clearing of forests and making buildings in those places force these birds to live near your places, in search of a better place to shelter. 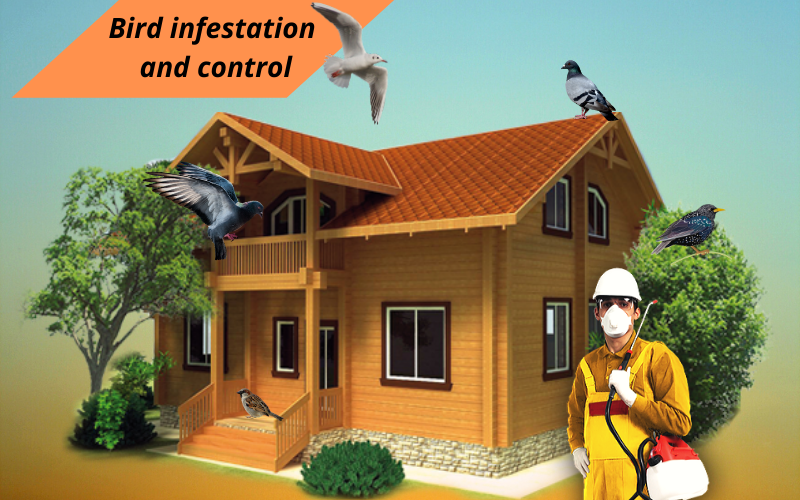 No doubt birds are good for making your surroundings more cheerful and everyone loves to have them nearby but what you might not know is that once these birds are comfortable somewhere, they attract more and more birds of their species at that same place. And when the no. increases, they become a source of nuisance for you. And not only this, many diseases get transmitted by these birds. Major Pest Control Geelong helps you in getting rid of these unwanted peace wreckers. In addition to this, birds also cause a lot of damage to your property, make your premise dirty and attract so many predators to your courtyard. If they are not taken care of then they can cause a lot of damage to your home and sooner you call Major Pest Control Geelong for help the better it will be for you as we will get rid of these pesky birds for the sake of your well being.

Types of birds in Geelong

Not all species of birds are harmful to you and your property. Many species do not cause any trouble to you as their population does not get too high or maybe their natural predators are also large in no. due to which their number is always below the level of concern. But some of the species are very harmful to you in many ways and they are the same reason due to which you require to get bird control Geelong done. Following are some of the concerned species that may be troublesome:

The signs of bird infestation are very obvious but most of the time people ignore it as they don’t mind getting pest control in case of birds. But you need to know some of the signs that will help you in knowing that there is a need for bird control Geelong. So Major Pest Control Geelong is listing below some of the warning signs of bird infestation: 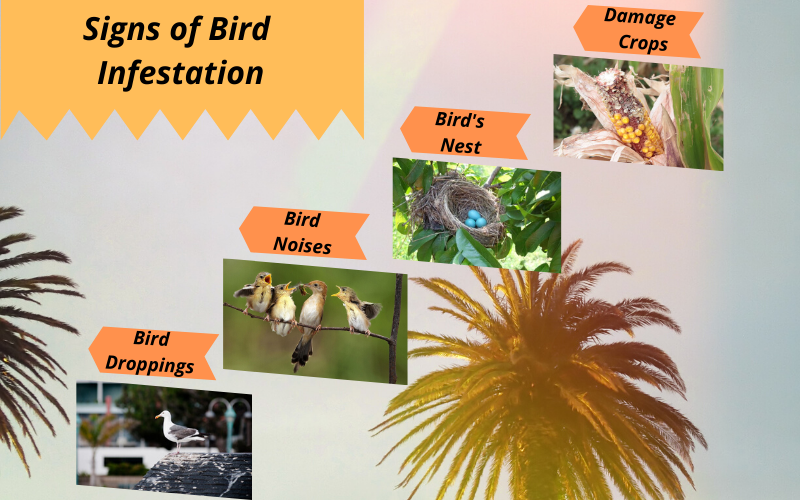 In nature, birds are mostly found in trees or bushes. These places are selected by the birds to stay safe from their predators, but in the absence of these natural places, these birds choose your property as a resort for safety. The following are stated some of the places that are chosen by the birds for hiding.

At first, all the birds look like not a big problem but with time they can prove to become a very harmful element for your property and resources. They can even multiply very fast resulting in a large population. In rural areas, people are well aware of the damage caused by birds. These destructive creatures may cause mayhem in fields by destroying large masses. That’s the reason why farmers hate them the most. After grasshoppers, birds like sparrows are considered to be the biggest threat to the farm products. Not only in rural but these birds create a lot of nuisance in urban areas also. Major Pest Control Geelong is a name you can rely upon for taking care of these pesky birds. Our staffs of professionals are trained specially for controlling the problems associated with all types of pests.

All the services related to bird control Geelong are listed below:

For controlling the problem of bird infestation, the first step that has to be taken into consideration and for this Major Pest Control Geelong is providing you a helpline no. where you can get in contact with our staff members. You will be guided in the best way possible by our trained workers. They will hear you out and fix the time and date for the termination work as per your convenience. As it might not always be possible to get to you at the same time when you call for help, in that case, you will be provided with some precautionary steps, that you can take, to minimize the risk, till our team reaches your premise and take care of the situation

After reaching your premise the first thin done by our staff is to inspect the type as well as the level of infestation. Firstly, it is important to know what type of area you are living in and what type of birds are bothering you. All the information is gathered, which can’t be collected on the call and based on all the information all the methods, that can come in handy for taking care of your problem, are listed so that the best ones can be shortlisted. Major Pest Control Geelong is amongst one of the leading pest control companies and we aim to give you the best in class services, so for this same reason we undertake all these steps.

After knowing the actual kind of problem that we are dealing with, what comes next is to determine what kind of techniques or methods will suit the situation the best. As there are a lot of ways in which bird control Geelong can be done but one thing that you must know is that the same type of technology can’t work for all types of birds. Now some birds are of different sizes and habits due to which it becomes very important to understand their behavior and based on that best method is adopted. Not just that another thing that fairly contributes towards the choice of method is the place where pest control work is to be done, as the same type of method might be very effective for pest control in one place but that same effective method may prove to be wasteful at another place.

The Need Of Bird Control Geelong

This is just to inform you about the seriousness of the problem of bird infestation. Most of the people don’t understand how dangerous these pests can be, so here are some of the major threats or problems caused by birds in your surroundings:

There are several do’s and don’ts that you, as a concerned person, should know to get rid of these pests. Major Pest Control Geelong aims at your wellbeing and for that, we not only provide the service of making your premise bird free but also provide you with some preventive measures, so that the problem of bird infestation never again arises.

By following these easy steps, you can easily keep your home bird free and if then also if you think you can’t handle the situation, you know that Major Pest Control Geelong is always there to help you.

After a full investigation of the situation and shortlisting the types of methods that can be used to handle the situation, what comes next is finally treating the underlying problem of bird infestation. Out of the techniques available the best one is chosen for effective and affordable pest control services. For controlling the problem of bird infestation there are many methods but out of these, most of the methods are violent. Major Pest Control Geelong tries to avoid violent methods and focus on choosing those methods in which killing of birds is avoided. Most commonly used methods for bird control are listed below: 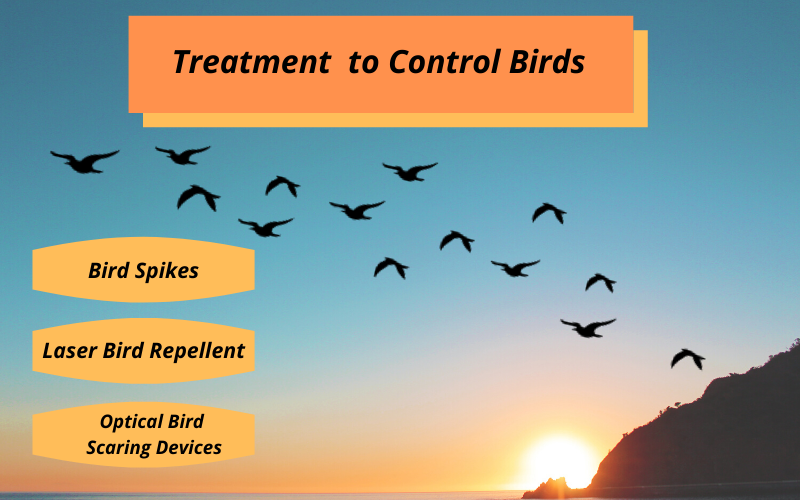 A widely used method for bird control is netting. In this method, all those areas, where birds can make their nests, are covered by nets. Networks as a barrier that stops birds from making their nests, in that place. Nets are mostly made up of durable items like metal or nylon, which does not wear off that easily. Another best part of netting is that it not just restricts the entrance of birds, but also stops other pests from entering your home. The holes in the netting are 1-1.5 wide. Nets provided by Major Pest Control Geelong come in different shapes, sizes, colours, and materials. For better results, these nets have to be replaced within 2-3 years, as birds or any other natural cause may damage and penetrate them, as a result, birds can infest the area again.

Another nonviolent method, used by Major Pest Control Geelong, is making use of electric wires, which give a mild shock to the birds, trying to nest near your building. The electric shock wires are placed at all the places where birds might infest your property easily. After that, they are connected to the electricity source. Once connected, the wire gives a minor shock to any creature, coming in contact with the wire. It is very effective as well as the eco-friendly pest control method which does not cause any harm to the pest birds and just force them to stay away.

A special and new device used for scaring away the birds is the optical gel. It is a modern technique that is being used by Major Pest Control Geelong. To use this technique firstly the infested area is properly cleaned and sterilized with the help of detergent and bleach respectively. After that, the optical gel is attached to the area, so that in the future, birds cannot nest there. This product can be applied at all the flat surfaces like roofs, balconies, ledges, etc. where the birds mostly nest.

This is quite an old method in the books of bird control. But with the advancement of technology, Major Pest Control Geelong has developed decoys that mimic the real predators of the birds. Most of the birds are afraid of predator birds like eagles, hawks, and oils, so the use of their decoys works very well for scaring away all the birds. The decoys used are mechanical which means that they show some sort of movement, as well as produce, sounds from time to time, due to which the birds don’t even dare to come near your home.

A special sort of light is developed and used by Major Pest Control Geelong for scaring away the birds from your premise. This type of technique is most suitable in large areas, as it covers the largest area for pest control. A bright beam of light is shot at the flock of birds, which scares them and forces them to fly away. After being continuously disturbed, birds go away from your premises and don’t come back for a longer period.

Use of bird spikes, provides by Major Pest Control Geelong helps you in getting rid of these pesky birds very effectively. It is installed in your home by our professional workers, who are trained in making your house pest-free. Pointed bid spikes are installed at those areas where birds are most likely to nest. These spikes are made of stainless steel, which means that they are highly durable. These spikes hurt the birds a little due to which they don’t settle there. Pointed spikes make it very difficult for the birds to settle and due to the same reason, they decide to move out of your home.

This method is used to make the birds weak so that it becomes easy for our workers to catch them. Some chemicals are mixed in food items and then used as bait. Once the birds take the bait, they become weak and unable to fly. Afterward, the unconscious birds are collected and set free in a place far away from your home. We are well aware that birds can trackback to the location that they are used to, that’s why Major Pest Control Geelong workers set them free in a habitat, where they can live without any problem and don’t return.

Follow up course of action by Pigeon Removal Geelong professionals